Deborah Ann Harry (born Angela Trimble; July 1, 1945) is an American singer, songwriter, model and actress, known as the lead singer of the new wave band Blondie. Her recordings with the band reached the number-one charts place in the United States and the United Kingdom on many occasions through 1979 to 1981 (plus a sixth UK number-one in 1999). 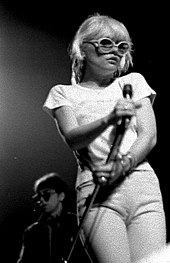 She is considered the first rapper to chart at number one in the U.S. for her vocals on “Rapture”. Harry also achieved success as a solo artist before reforming Blondie in the late 1990s. Her acting career includes over 60 film roles, and numerous television appearances.

Harry initially named Angela Trimble, she was adopted at three months by Richard Smith Harry and Catherine (née Peters), gift shop proprietors in Hawthorne, New Jersey, and renamed Deborah Ann Harry. Harry learned of her adoption at four years old and later, in the late 1980s, she tracked down her birth mother, who refused to have any contact with her. Harry attended Hawthorne High School, and graduated in 1963. She graduated from Centenary College in Hackettstown, New Jersey with an Associate of Arts degree in 1965. Before beginning her singing career, she moved to New York City in the late 1960s, and worked there as a secretary at BBC Radio’s office for one year. Later, she was a waitress at Max’s Kansas City, a go-go dancer in a Union City, New Jersey discothèque, and a Playboy Bunny.