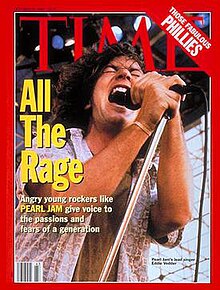 Eddie Vedder (born Edward Louis Severson III; December 23, 1964) is an American musician, multi-instrumentalist and singer-songwriter best known as the lead vocalist and one of three guitarists of the American rock band Pearl Jam. He is known for his powerful baritone vocals. He also appeared as a guest vocalist in Temple of the Dog, the one-off tribute band dedicated to the late singer Andrew Wood.

In 2007, Vedder released his first solo album as a soundtrack for the film Into the Wild (2007). His second album Ukulele Songs and a live DVD titled Water on the Road were released in 2011.

In 2017, Vedder was inducted into the Rock and Roll Hall of Fame as a member of Pearl Jam.

Vedder was born Edward Louis Severson III in the Chicago suburb of Evanston, Illinois, on December 23, 1964, to Karen Lee Vedder and Edward Louis Severson, Jr. His parents divorced in 1965, when Vedder was an infant. His mother soon remarried, to a man named Peter Mueller. Vedder was raised believing that Mueller was his biological father, and he went by the name Edward Mueller for a time. Vedder’s ancestry includes Dutch, German and Danish.

While living in Evanston, Vedder’s family fostered seven younger children in a group home. In the mid-1970s, the family, including Vedder’s three younger half-brothers, moved to San Diego County, California. It was at this point that Vedder, who had received a guitar from his mother on his twelfth birthday, began turning to music (as well as surfing) as a source of comfort. He particularly found solace in the Who’s 1973 album, Quadrophenia. He said, “When I was around 15 or 16… I was all alone—except for music.” His mother and Mueller divorced when Vedder was in his late teens. His mother and brothers moved back to the Chicago area, but Vedder remained with his stepfather in California so he would not have to change schools. 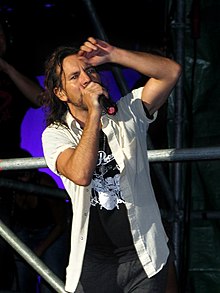 After the divorce, Vedder learned the truth about his parentage: Mueller was really his stepfather. Vedder had met his biological father briefly as a child, but had believed that Severson was merely an old friend of his parents. By the time Vedder learned the truth, Severson had died of multiple sclerosis. During his senior year at San Dieguito High School, Vedder moved out to live on his own in an apartment, supporting himself with a nightly job at a drug store in Encinitas. Because of the pressure of work and school, Vedder dropped out of high school. He joined the rest of his family in Chicago, and it was at this time that he changed his name to Vedder, his mother’s maiden name.

In the early 1980s, while working as a waiter, Eddie earned his high school GED, and briefly attended a community college near Chicago. In 1984, Vedder returned to San Diego, with his girlfriend, Beth Liebling and his friend Frank. He kept busy recording demo tapes at his home and working various jobs, including a position as a contracted security guard at the La Valencia Hotel in La Jolla. Vedder had several stints in San Diego area bands, including Surf and Destroy and the Butts. One of those bands, called Indian Style, included future Rage Against the Machine and Audioslave drummer Brad Wilk. In 1988, Vedder became the vocalist for the San Diego progressive funk rock band Bad Radio. The music of the original incarnation of the band was influenced by Duran Duran; however, after Vedder joined Bad Radio, the band moved on to a more alternative rock sound influenced by the Red Hot Chili Peppers.