Orianthi Penny Panagaris (born 22 January 1985), known mononymously as Orianthi, is an Australian musician, singer and songwriter known principally for rehearsing with Michael Jackson for his ill-fated This Is It concert series, and for performing in Alice Cooper’s touring band. Her debut single “According to You” peaked at No. 3 in Japan, No. 8 in Australia and No. 17 in the US; her second album, Believe, received a worldwide release in late 2009. In 2009, Orianthi was named one of the 12 Greatest Female Electric Guitarists by Elle magazine. She also won the award as “Breakthrough Guitarist of the Year” 2010 by Guitar International magazine. 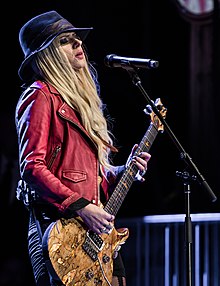 Orianthi began playing piano at the age of three and, at the encouragement of her father, moved to acoustic guitar at the age of six. When she was eleven, she took up electric guitar and left her school, Mercedes College, enrolling at Cabra Dominican College. She also attended St Peter’s Collegiate Girls’ School for a short period. At the age of 15, she turned her focus to writing songs and so began her professional career. She has been playing in bands since the age of 14 and performed in her first stage show for Steve Vai at the age of 15. Orianthi met and jammed with Carlos Santana when she was 18. He invited Orianthi to get up and jam with him at soundcheck then later asked if she would join him on stage that night to jam at his Adelaide concert, Memorial Drive on 30 March 2003.

Orianthi appeared at the 51st annual Grammy Awards in February 2009 as Carrie Underwood’s lead guitarist, with Underwood inviting Orianthi to become a member of her band. Following that performance in addition to recommendations from industry professionals Michael Jackson’s management reached out to Orianthi for an audition for This Is It concerts. Orianthi was hence Michael Jackson’s lead guitarist and was present on all rehearsals for his This Is It concerts before his death. In regard to being handpicked by Jackson, she stated:

I don’t know exactly why he picked me, but he watched my YouTube videos and loved them. He had his choice of guitar players, but I came in and played the ‘Beat It’ solo for him. Afterward he was so happy he got up and grabbed my arm and started walking up and down the stage area with me. He said, ‘Can you play once for me?’ and hired me that night. I wish he was still around. He made me believe in myself more, and I learned so much. Going into it, I thought it would be all about playing guitar solos. But the majority of it was playing chords and funky rhythms.

She played and sang at Jackson’s memorial, globally televised live on 7 July 2009. She appears in the film Michael Jackson’s This Is It, which chronicles the rehearsals for the tour and shows her and Jackson on stage. She presented an award at the 2009 American Music Awards, which Jackson won posthumously. Orianthi also appears on “We Are the World 25 for Haiti” – with the original co-written and partly performed by Jackson. She plays guitar on the song “Monster” by Michael Jackson featuring 50 Cent which was released on Michael on 14 December 2010.

Orianthi – Highly Strung ft. Steve Vai
Orianthi – According To You
Orianthi – Voodoo Child
This Is It – Beat It (Solo) – Michael Jackson & Orianthi