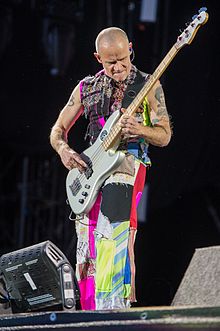 Michael Peter Balzary (born 16 October 1962), known professionally as Flea, is an Australian-American musician and actor. He is best known as the bassist and founding member of the rock band Red Hot Chili Peppers. Flea is widely considered among the best bassists of all time. Flea briefly appeared as the bassist for such bands as What Is This?, Fear, and Jane’s Addiction. He has performed with rock supergroups Atoms for Peace, Antemasque, Pigface, and Rocket Juice & the Moon, and collaborated with The Mars Volta, Johnny Cash, Tom Waits, Alanis Morissette, and Young MC. Flea also performed live with Nirvana in 1993 playing the trumpet.

Flea incorporates elements of funk (including slap bass), psychedelic, punk, and hard rock. In 2009, Rolling Stone readers ranked Flea the second best bassist of all time, behind only John Entwistle. In 2012, he and the other members of Red Hot Chili Peppers were inducted into the Rock and Roll Hall of Fame.

Since 1984, Flea has acted in over 20 films and television series such as Suburbia, Back to the Future Part II and Part III, My Own Private Idaho, The Chase, Fear and Loathing in Las Vegas, Dudes, Son in Law, The Big Lebowski, Low Down, Baby Driver and Boy Erased, in addition to voicing the character Donnie Thornberry in The Wild Thornberrys animated television series and films.

Flea is also the co-founder of Silverlake Conservatory of Music, a non-profit music education organization founded in 2001 for underprivileged children. In 2019 Flea will release his memoir Acid for the Children which will detail his life prior to the formation of Red Hot Chili Peppers.